The 4th owner of 3 Abbey Road was William Todd and his wife Caroline (nee Grange). They were the parents to twelve children. At the time of their arrival at their new home on Abbey Road in 1889, William, a retired architect, and Caroline were 65 and 60 years old (respectively) and at least six of their children were still living at home. In 1890, one of their daughters, Constance Honor Todd, married Charles Percy Wilcox, leaving grown siblings Stephen (29) – a wine merchant, Emily (28), Reginald (22) – an electrical engineer, and Harry (19), all living at home. According to the 1891 census, also living in the house were a 49 year old niece and 4 year old granddaughter, along with five servants…13 in all! 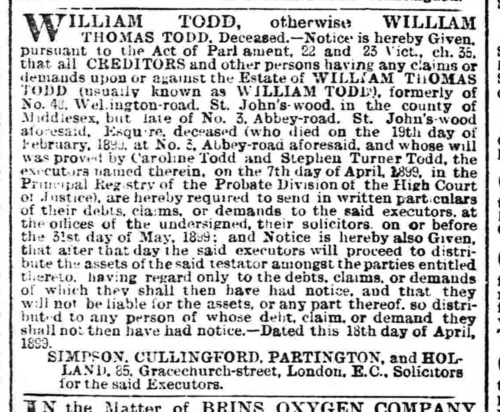 William Todd the younger passed away at 3 Abbey Road on February 19, 1899 from pneumonia that he developed after a bout with the flu. At the time, his estate was worth £23,817. In today’s market (2019) that translates to approximately £3,035,103 or $3,699,183. He named his wife Caroline Todd and his son Stephen Turner Todd, who was 38, single and still living at home, as co-executers of his will. Also still living at home was Caroline and William’s unmarried daughter Emily Lucy Todd, age 35. Stephen and Emily remained in the house for a couple more years after their mother’s death on December 17, 1911.

According to Brian Southall’s book, Abbey Road, Stephen Todd turned over 3 Abbey Road to his cousin Olive Westbrook Todd (daughter of Harold Cameron Todd) to manage as a rental property. This probably never happened since in 1916 when Olive was just 15 years old (4 years after Caroline Todd’s death), her parents moved the family to Quebec, Canada. Olive eventually became a buyer for the T. Easton department store chain in Canada and did return to England several times on business before eventually becoming a fashion designer herself and opening her own store in London in the 1920s.