Book Review: “The Beatles Era – A Quest For The Secret of The Beatles” by Peter Eijgenhuijsen

This review is written by Amy McGrath Hughes 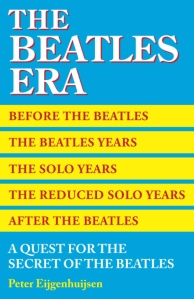 Dutch author Peter Eijgenhuijsen has independently published an intriguingly titled book on The Beatles. As he states, “This book is not about what happened, but about why it happened.”

In that context, I was introduced to The Beatles Era – A Quest For The Secret of The Beatles (2021). Coming from a historical standpoint, much of this book draws on familiar anecdotes and facts that Eijgenhuijsen cites thoroughly. His reasoning for this publication was a conversation with a friend who made a point of dissecting the band’s career into several distinct sections, which is analyzed in detail in these pages.

Most of the publication is taken with the discussion of how the band revolved around these sections/eras. There are several chronological off-shoots that Eijgenhuijsen heads down and that makes for a somewhat disjointed rendering. The tone is skewed with personal recollections that have a more European slant (and granted, it is coming from his upbringing in the Netherlands), which doesn’t get a lot of attention in say, a global Beatles biography.

While I found this aspect interesting, what I have come away with would be more suited as a ‘primer’ in Beatles lore. While he is very thorough in speaking to his personal likes of particular songs or periods in any given point in their history (which does include the solo years), I would have expected more factual passages instead of a re-tread of well-known stories.

Two entries that felt off-kilter were the introduction of a fictional interview (where The Beatles had not made the impact they did) and another conversational story spinning in an alternate universe Beatles. While well-written, I honestly felt it didn’t have a place within the context of this book.

One standout chapter however holds some weight: The Reduced Solo Years. Here Eijgenhuijsen takes on each Beatle in more recent times (with Lennon referenced since 1980 by the other three). Being able to ascertain each of the three’s ‘later’ musical contributions is always a tricky outing in any Beatles landscape: comparisons are inevitable. But I appreciated Eijgenhuijsen’s dive into Harrison/McCartney/Starr releases/collaborations that critique releases right up the present day. I admit: it’s tough in an epilogue to sum up ‘McCartney III’ so that a reader understands it’s place in history. But he gives it the best summations for a generation that may not be familiar with say, ‘Chaos and Creation In The Backyard.’

‘The Beatles Era’ is certainly not a hefty tome and I would likely recommend this to someone who would want a brief read-through with a sprinkling of symbolistic fandom. I definitely think that Eijgenhuijsen could have a second career in the fictionalized world of The Beatles… perhaps that will be a second book! In the meantime…

I will give this book 3 out of 4 beetles.

Tagged as Amy McGrath Hughes, book review, guest review, Peter Eijgenhuijsen, The Beatles Era – A Quest For The Secret of The Beatles

4 responses to “Book Review: “The Beatles Era – A Quest For The Secret of The Beatles” by Peter Eijgenhuijsen”