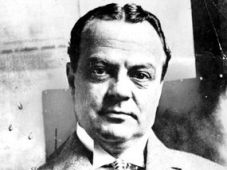 Some may say that before the Beatles walked through the door of Abbey Road Studios, this man, Arthur John Maundy Gregory was the most famous person to ever walk the halls of 3 Abbey Road. But for all the wrong reasons. There have been at least 5 books written about ‘Maundy Gregory’. There have also been episodes of TV crime shows about the two murders he is suspected of committing and audio books that discuss his shady dealings.

Maundy Gregory was the owner of 3 Abbey Road from 1922 – June 1929, but in order to understand the man, you have to go back a little further into his past. The stories are amazing, but here a a brief synopsis.

Arthur John Maundy Gregory was born on July 1, 1877, to Elizabeth and Reverend Francis Maundy Gregory – the Vicar of St. Michael’s Church in Southampton. He was the fourth born out of six children and the third of five sons. By the age of 5, three of his siblings passed away. Maundy would go on to college, but upon the death of his father in 1899, he would drop out pursue an unsuccessful career in theater. During this time, he developed a deep and lasting friendship with an actress by the name of Edith Marion Davies (her stage name was Vivienne Peirrepont) and her husband Frederick Rosse. In the summer of 1922, Maudy and Edith moved into 3 Abbey Road while her husband was on tour. The Rosses would occupy the downstairs portion and Maundy the upstairs portion of the house. There were frequent parties at the house.

At one point in time, Edith would become her teenage niece’s unofficial guardian and Ethel would move into the home. Even though the relationship between Edith and the troubled, rebellious teen would eventually become strained, Ethel remained the sole beneficiary in Edith’s will.

In 1923, the Rosses would separate but never divorce and Fred would promise to give half his generous income to her for the rest of his life. This would suit Maundy Gregory just fine since he like to lead an extravagant lifestyle on his minimal income. Maundy and Edith would continue to through extravagant parties and be sure to make appearances at others. Some people would believe they were a married couple upon meeting them, but they generally referred to each other as brother and sister.

At this time in British history, politics were taking a turn for the worse. It was becoming quite common for some members of the Parliament to pack the House of Lords but offering ‘honours’ to friends who had the same political leanings. This eventually became known as Cash for Honours. Members of Parliament would find someone who would do the dirty work themselves in order to avoid being tied to such dealings. And so it was, that Maundy Gregory would become a dealer of titles. (For about $10k, anyone could become a Lord.) He would be arrest in 1933 and told he could leave the country for a light sentence.

But…What about the accusations of murder against Maundy? It’s been said that he was responsible for the disappearance and presumed murder of a man who tried to extort money from Maundy in exchange for keeping secret about his selling of Lordships. It’s also believed the Maundy manipulated Edith Rosse into changing her will on her death bed to make him the sole beneficiary of her estate. It’s believed by many that he poisoned her. Her niece would eventually contest the will, but when the body was exhumed for further examination, Maundy had conveniently had Edith buried on the rivers edge of an island so that the casket had filled with water and washed away any evidence of poisoning.

There is so many more details to the life of Arthur John Maundy Gregory that there just isn’t enough room in my blog, but I would suggest my readers to pick up a copy of Cash for Honours: The Story of Maundy Gregory by Andrew Cook to learn more about Maundy and his life at 3 Abbey Road.