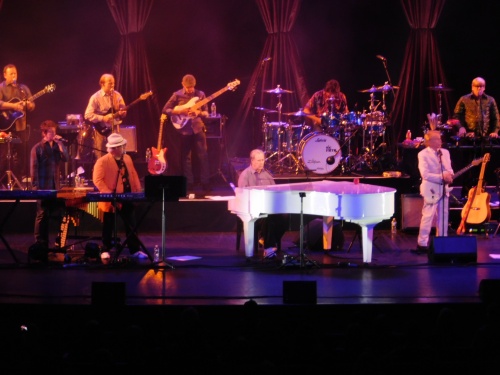 Continuing with on my Beach Boys kick….Last night, my husband Craig and I had the great pleasure of seeing former Beach Boy Brian Wilson in concert in Atlantic City, NJ. This is one of the geniuses of the rock world that I’m glad I got to see before it was too late.

How could I say anything bad about this show when Brian opened the show with my favorite Beach Boys’ song, Heroes and Villains. And there I was, wondering if they’d even play it. I actually remember where I was the very first time I heard that song in the mid 80s! (intersection of Rt. 401 and Phoenixville Pike in Malvern, PA. I called the radio station when I got home to find out the name of the song and who sung it. The DJ told me the wrong song, despite my objections, so it took me weeks to track it down.)

This is a must see show for anyone (notice I didn’t say Beach Boys or Beatles fans?). Even though, Brian remains seated at the piano throughout the show, managing to do only some hand-dancing during several songs, the sound and the rest of the band make this a great show that had the fans dancing in the aisles. Al Jardine is in top form, and his son Matt Jardine sings lead on several songs, letting us all know he has followed well in his father’s sandy footsteps. The only part of the show I could have done without was Blondie Chaplin’s stage antics as he ran about the stage as if he was at a Stones show. But hey, if the rest of the band could tolerate it, who am I to criticize.

Check out Brian Wilson‘s website for the cities and dates on the rest of his tour. You’ll be glad you did! And for that reason…

I rate this concert: 4 out of 4 Beetles!

***After thoughts: I decided to add a little bit more to this review after someone commented on the video from last night’s show of “Heroes and Villains” that I posted on Facebook. Brian’s voice is not at it’s best, but the man has been through a lot in his 73 years on this planet and still suffers the effects of years of dealing with his own health issues. If you want an explanation of his issues, watch the movie “Love & Mercy“. At the same time, Paul McCartney isn’t at his vocal best anymore and after seeing him three times in the past 25 years, I’ve decided not to see him live anymore. I’d rather remember his shows from when Linda was still with him. This was my first (and probably last) time ever seeing Brian Wilson in concert, but I am oh-so glad that I made the trip and spent the money to be able to see a musical genius that, in my opinion, is equal to the likes of the Beatles.

One response to “Concert Review: Brian Wilson at the Tropicana, Atlantic City 10/24/2015”