Friday night (June 10th) was the premiere of The Lost Weekend: A Love Story at the Tribeca Film Festival. The film is a documentary about the love affair between John Lennon and his (and Yoko Ono’s) 22 year old personal assistant – May Pang. The tickets to the online screening event sold out weeks in advance. If you didn’t get a chance to see it, I would recommend that you follow May Pang on Facebook, since she will be letting her followers know when the movie will be available to the public.

So…I’ve started, stopped, cut, pasted, typed and deleted this review several times over the past 24 hours. I’ve finally realized I need to be honest and just say what I need to say about this film. To whitewash any of the flaws would be dishonest. And let’s be honest here, no one is sitting around waiting for the Beatles Freak Review opinion of this documentary. That being said…

Every Beatle and Lennon fan should see this film. Yeah, it’s that good. If you’ve read May’s 1983 book – Loving John, even better because you’ll already know most of her story, but there will still be some surprises to be found in the film. But…you’re also going to find some things missing. Like Sid Bernstein. 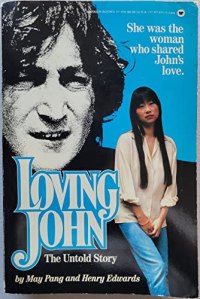 The film opens with a shaky clip of John Lennon from a home video…and I admit that my first thoughts was, “Oh, please don’t let the rest of the film be shaky!” Rest assured…it’s not. It’s filled with so many photos and videos of John, May, Yoko, Julian, Cynthia, Elton, Alice Cooper, etc. and some wonderful animation sequences inspired by John’s drawings.

The next thing you’re going to notice (if you know May or have heard her interviewed in the past), is that her heavy New York accent is toned down. I have to say, I was okay with that. What I didn’t care for was the way her narration some times came off as if she were reading directly from a script or times when her inflection/tone would go higher like a younger version of herself. I don’t think it added anything to the power of her story.

So what did I love? As I said, I loved the animation…I loved the never ending pictures (a lot of which came from her book Instamatic Karma) and videos of her, John and Julian. And of course, I loved seeing Julian talking about his experiences growing up with May and his father.

And the most touching part…the tear that rolled down her cheek at the end. And for that reason…

Filed under Documentary, May Pang