Book Review: “The New Norm: Lessons from a look-alike” by Mike Oltersdorf 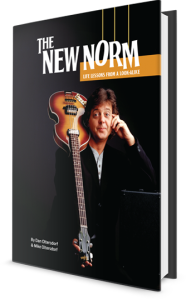 The New Norm by Mike and Dan Oltersdorf came up on Amazon as a suggested read while I was looking at another book.  What attracted me to this book, besides the fact that this guy looks like my favorite Beatle, is that he has Parkinson’s disease.  I spent many years working in nursing homes as a nurses aid and I’ve seen the devastation that Parkinson’s can reek on someone’s body.  Trust me folks, Alzheimer’s has nothing on Parkinson’s.  My heart goes out to Mike.

Mike Oltersdorf didn’t always look like Paul McCartney.  It wasn’t until his late 40’s after gaining 40 pounds that people started to tell him his resembled the cute Beatle.  This lead to many years of him working as a celebrity look-alike and winning the Beatles Look-alike contest 12 times at Beatles Fest.  But nothing could prepare him for the Parkinson’s diagnosis that made him feel as if his exciting career was over.  Or was it?

This book is Mike’s (and his son Dan) story of how he managed to spin a new take on his life and how he found enlightenment from the lyrics of two Beatles songs.  And through these lyrics, he passes his gift on to the world to teach us all how to live the new norm everyday.

This book is just 80 pages, but packs a punch and ends with a worksheet to help you find your gift to share with the world.  Proceeds from each book benefit the National Parkinson Foundation, so even if you just buy the $0.99 Kindle version, you can know you’ve helped others, but I think you’ll enjoy Mike’s message.

You can order Mike’s book in paperback or for Kindle at Amazon.