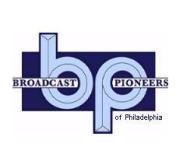 I had the great pleasure of attending this month’s meeting of the Broadcast Pioneers of Philadelphia.  It was recommended to me by T. Morgan after I read and reviewed his book in November 2015.  The meeting was opened to the public and was held at the lovely Bala Golf Club in Bala Cynwyd, PA.  There was a small cost of $28 for non-members to cover the cost of the luncheon.

The topic of this month’s luncheon was The British Music Invasion!

MC for the afternoon is Tom Lamaine and the panel was made up of:

Prior to the panel discussion, I had the good fortune of sitting down to lunch at table with Tommy McCarthy and Michael Tearson.  Tommy is the program director for Oldies 98 (WOGL) in Philadelphia and Michael Tearson is a well-known long-time on-air personality in Philadelphia.  Just sitting and listening to these gentlemen talk was amazing.  And when they both joined the panel discussion, their knowledge of music and the industry was beyond compare.  In fact, the entire panel was something to behold.  Just when you thought you knew all the Beatles experts…along comes the Broadcast Pioneers!

I would highly recommend that anyone in the Philly area that is interested in the history of music, whether it’s pop, rock or oldies, sign up for the Broadcast Pioneers mailing list and try to make it out to one of their luncheons.  It’s well worth your time and cost to get in.

Here are the dates for their monthly meetings (topics to be announced): Monthly Luncheons

…and for that reason,