How lucky are we?  An old friend of my husband’s invited us to join him and his wife to see The Mersey Beatles at the Sellersville Theater.  AND Julia Baird (John Lennon’s half sister) was there to introduce the band, sell her book “Imagine This” and do a meet & greet!  I reviewed Julia’s book last year and gave it four Beetles.  You can read that review here.  Also, I did talk with Julia about the book I’m reading for next weeks review…but you’ll have to wait until next week to find out her opinion.

The Mersey Beatles are just another Beatles tribute band.  These guys all are childhood friend who were born in Liverpool.  Sound familiar?  After realizing that they were never going to make it big as band and that they always got a great response when they covered songs by the Fab Four, they decided to create their own tribute band in 1999.  In 2002, they became the resident Beatles Tribute band at the Cavern Club in Liverpool and remained so for 10 years! 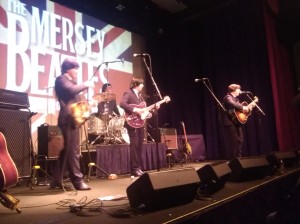 So what makes this band stand out?  They do go through 3 costume changes with the early suits, then Sgt. Pepper’s and ending with Abbey Road dress.  They bring just enough on stage banter in their natural Scouse accents without over doing it and losing the audience in some silly over rehearsed skit.  At the same time, they will talk with the audience (they thanked the people who yelled out that they were killing it!) and they take requests.  And some of their harmonies are really going to wow you!

All in all, this was a great experience.  And I’m glad I got to see this band for the debut American tour.  Though they’re are probably boarding a plane right now to return to Liverpool, they will be returning WITH JULIA to the U.S. this July for a tour of the midwest!  And for that reason…

I rate this concert, 4 out of 4 Beetles!