I know it’s been several weeks since I last posted a blog, but a friend of mine kind of lit a fire under my ass and so here it is. I need to apologize ahead of time for the lack of audio in this video. That’ll teach me not to preview the video before leaving NAMM 2017! Yes, I’m really embarrassed that this didn’t come out right. I believe the mic wasn’t properly plugged into my iPad. Also, the initial feedback you’ll hear fades away…so bear with it. 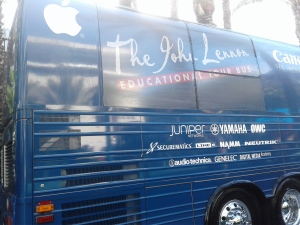 The John Lennon Educational Tour Bus is absolutely amazing! From the outside, there is no clue as to how extensive the inside is. This is an entire recording studio on wheels! The bus travels to schools from coast to coast in the U.S., teaching kids how to record music, engineer and make videos. And this is its 20th anniversary doing so!

As the video opens, our host Ryan sits at the main console and to his right, you’ll see his image on a computer screen. That’s because the bus is filled with video cameras. Not just for security reasons, but for also recording music videos. After a few minutes, Ryan gets up and goes into the second section of the bus and closes the door behind him to demonstrate that each of the three sections of the bus are sound proof. In the second section are the drums. In the third section of the bus you’ll notice a lot of curtains are hung. When they are all fully spread out, they become a green screen for shooting videos with any background the artist my choose to use. The third section is also where the the employees sleep while traveling all year round with the bus. The bus sleeps three and Ryan at one point spent over 4.5 years traveling on the bus. (note: every other night they sleep in a hotel so they can shower and get a proper meal!) 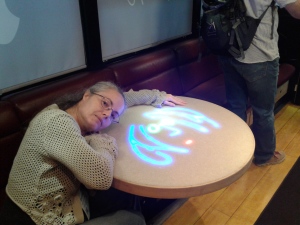 There are a lot of corporate sponsors that make this bus what it is, but you can also donate to help keep it on the road. Yoko Ono has donated to the bus and Sean Lennon has visited the bus (Julian has not…yet.) There’s even a John Lennon Educational Tour Bus in England now.

For more information on the bus and it’s schedule, go to: www.LennonBus.org. If you’re an educator, you can also request that the bus visit your school.