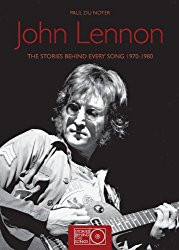 John Lennon: The Stories Behind Every Song 1970-1980 is written by Paul Du Noyer – a rock journalist from Liverpool. I picked up this book off the 75% off rack at Barnes & Noble. When I realized it was only going to cost me $1.98, I went back and bought the other three copies to give away to my readers. (But then again, maybe after reading my review you might not want a copy!)

The Stories Behind Every Song 1970-1980 is now in it’s 4th edition. I’m not sure why it takes four tries and 20 years to get a book about John Lennon’s songs right, but obviously it wasn’t to fix the few minor typos throughout. Yet, despite my head scratching moment of confusion over the reprinting, I did find this book really well written and informative.

Du Noyer tells John’s life story while telling what motivated John to write each of his solo albums and songs. Like many other Beatles experts, he believes that when it came to John’s music, he wore his heart on his sleeve. John only knew how to write about his own life experiences…no made up story lines. So I’m happy to report that Du Noyer does include John’s lost weekend years in this book along with his time with May Pang. But I’m also sad to report that the author believes that the lost weekend was also a very dark, drunken time in John’s life where he pined endlessly for 18 months for Yoko to take him back.

Still a great book for those who want to delve deeper into Lennon’s music and the meaning and story behind the albums and songs. And for that reason…

GIVEAWAY: I have three copies of this book to give to three of my readers. Just leave a comment below and you’re entered. It’s that simple. Rules: Only one entry per person. I will pick the winners next Sunday morning (September 3, 2017) and announce them in my blog.