Book Review: “When Life Sends You Lemons, Make LENNONAID: What John Lennon’s life did for mine” by Kaya John 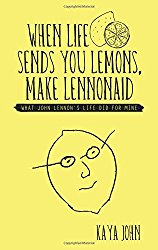 When Life Sends You Lemons, Make LENNONAID: What John Lennon’s life did for mine

by Kaya John was recommended to me by a friend. In fact, I was asked if I would be willing to interview the author for my blog. Instead, I think a review of this self-published autobiography/memoir is in order.

As a publicist for several self-published authors, I’m generally very lenient when reviewing self-published books. I believe everyone has a story to tell and should at some point in their life share their story with the world. I went into this book with the same attitude and early on came to the decision that it would be very hard to rate someone’s memoir, let alone judge their life story. Kaya’s story is that of a broken and abusive childhood and the only thing that brought her joy was the music of the Beatles and John Lennon. I could relate…until page 131.

I somehow feel quieter inside now that Cynthia has finally let it all out. That needed to happen. We needed to know that about John and Cynthia really needed to tell it. I was always so afraid of what her truth might be. I understood about the coldness and the temper but I must say I was relieved to find out he only hit her once, I was really afraid he could have been a real constant physical abuser. So he wasn’t as bad as I though he might be.

Did she really just justify all of John’s abuse because he only hit his wife Cynthia once? Is she excusing the physical abuse against May and Yoko too? I found this one paragraph incredibly disturbing. But the author didn’t stop there.

Ms. John talks excessively about her parent’s flaws, illnesses and addictions that led to her not so happy childhood, but only hints at her own flaws including addiction and a failed marriage at some point in her life. She also goes on to lecture about the importance of becoming a vegetarian or vegan, even sinking so low as to say about those who eat meat: “And I wonder what the mutilation, torture, rape, confinement and murder of conscious, intelligent animals is doing to their soul.”

The last 26 pages of this 180 page book are all about the “Beatles friends and family” that Kaya has met over the years and all of her best memories of attending all but one Fest for Beatles Fans, making this book read more like a blog than a book. In fact, I would recommend she take up blogging instead of writing books…

I couldn’t rate this book even if I wanted to…sorry.