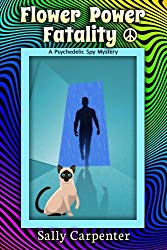 is the third book I’ve read by Sally Carpenter and reviewed on this blog. Sandy writes the Sandy Fairfax Teen Idol series of mysteries and now she’s branched out with a new series. She’s a huge Beatles fan and whenever possible, she’ll mention them in her books. In fact, her first novel, The Baffled Beatlemaniac Caper is about a mysterious murder at a Beatles convention.

Flower Power Fatality is based in 1967. The lead character Noelle McNabb finds herself knee deep in helping to solve the mysterious murder of a man who knocks at her door on a cold rainy night and falls to her floor from a gunshot wound when she answers. It isn’t long before a secret spy organization shows up looking for information about the dead man that she doesn’t have. Or does she?

I love the way Sally can write a great story that’s so easy to sit back and relax to. These are the books that are true beach books or books for when you just need to escape into another world. There’s not a lot of gore, swearing, sex or nudity. Just simply good writing in a whodunit. Throughout this book, she names some of the chapters after Beatles songs and at least twice, the Beatles are mentioned, whether it’s Noelle putting their album on her turntable to chill out to or some other small incident. No matter where you go, there’s always room for more Beatles. And for that reason…