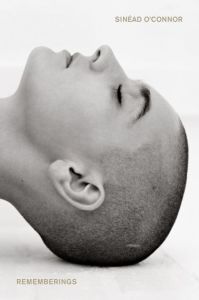 On May 18th, I was browsing through Facebook when I saw a post by Elaine Schock (wife of Mikael Gilmore and former publicist of Sinead O’Connor) with a link to a NY Times article about the upcoming release of Sinead O’Connor‘s autobiography – Rememberings. I immediately headed over to Amazon to pre-order a copy for it’s release on June 1st.

I’m guessing that most people have a pretty good idea of how the rise and fall of Sinead’s career occurred back in the early 1990’s, but to make it really, really brief for those that don’t know…she rose to international fame with the song “Nothing Compares 2 U” that was written by Prince…and then on an episode of Saturday Night Live in 1992, she tore up a photo of the Pope on live TV and her career crashed. Then to make matters even worse, it was reported that she refused to perform if the national anthem was played before any of her concerts in the U.S. She became a publicity nightmare!

So…that’s the story…that’s what I remember…and pretty much all I knew about Sinead for a couple decades. Just like everyone else in the word, I have always loved the song Nothing Compares 2 U, but never paid her any mind after she seem to fall off the face of the earth. That is until she showed up on social media in the early 2000s when I started following her…and what a ride that was! She was brutally honest and severely messed up…at one point asking her fans to find her a husband! And they did…and she married him in Las Vegas, but like everything else in her life that crashed. It wasn’t long before she was on social media pleading with her followers to get her help immediately…she was holed up in some motel in New Jersey and was suicidal. I lost track of her  and her craziness after that…until now…

Sinead begins her story by letting her readers know that the book is written in two different voices. Of course, the first thing one thinks upon hearing this is…how many voices does she hear? Are these different people living inside her? She gives no really good explanation and the book begins as if it’s written by a child as she tells the story of her troubled upbringing in Dublin. The grammar police would have a field day with her over the way it’s written. Some of the stories are nothing short of bizarre and sickening as she tells of the abuse of her and her siblings at the hands of a mentally ill mother and an emotionally distant father. It’s nothing short of weird and it’s not something I could just speed read through. I had to put the book down and pick it up over several days.

The story continues through the beginning and height of her career and the eventually fall from grace after the SNL episode. Then Sinead takes a weird turn…she starts breaking down each of her albums and telling about the meanings behind each song. WAIT! What happened to how she ended up with four children? What about the husband she married in Las Vegas and the breakdown in the hotel in NJ? Is she really going to skip over all the CRAZY parts?!

Actually…no. And in a different voice from the rest of the book (that actually started with the stories behind the songs), Sinead starts getting brutally honest about adulthood, her children, and much of her time dealing with her mental health. It’s not a complete story…but what she does remember is as honest as can be. And for that reason…