So this is another post/review that is all about me clearing off the end table next to our couch. It’s where all the to-be-read Beatles books gather and collect dust until I get around to giving them their proper due.

I don’t subscribe to The New Yorker magazine. Nor would I consider picking it up to just peruse in my spare time, but a couple weeks ago, someone on Facebook mentioned that there was an article written by Paul McCartney about how he came about writing the song Eleanor Rigby. Later that day when I got home from work, there was a copy of the October 18th issue of the magazine. It didn’t match the cover that was posted on Facebook and it was addressed to my darling neighbor Janice. Just as I was about to return it, she dropped by to tell me there was a great Beatles article in it, so she passed it on to me. And subsequently, the next issue with the article by Paul!

**Note: If you click on the magazine covers in this post, it will take you straight to the articles themselves. If you want my opinion (LOL) or want to know how to get yourself actual copies keep reading.

The October 18th article is titled, “Let the Record Show: Paul McCartney’s long and winding road” by David Remnick. It opens with a two page picture of the Beatles planning on the roof of Apple and the article spans 10 pages. I think the most interesting part of the article/interview was hearing about the author going to Paul’s house in the Hamptons for a party he was throwing to preview the new Beatles documentary “Get Back“. 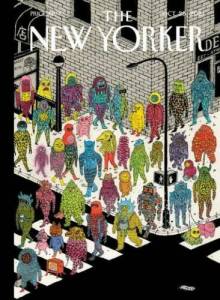 The October 25th article is titled, “Writing Eleanor Rigby: Behind the Beatles’ breakthrough” by Paul McCartney. It’s three page article that spends a lot of time straying from the topic. Not that that is a bad thing when you remember the author is Paul, but it does give the impression that the original story may not have been long enough and they needed filler. Lucky for us…Paul has plenty of great stories for filler.

I poked around the internet looking for places to buy copies of these issues if you’d like to add them to your collection. Unfortunately, it doesn’t appear that The New Yorker or it’s parent company Conde Naste offer back issues on their website. But it you go to Ebay or Amazon (I did the search for you, just click the links), you can find several people selling their copies. I know that I’ll be stashing my copies away!