Review: The Rock and Roll Hall of Fame and Museum

Finally…I made it to the Rock and Roll Hall of Fame in Cleveland, OH.  I’ve been talking about doing this for years.  And I’m happy to report, that it is the last thing I did in 2015 when I paid my respects on December 31st.  Anyone who remembers several decades ago when the powers that be were trying to decide where to build the hall, the final two possible cities came down to Cleveland, OH and Philadelphia, PA.  Seeing as how I live just outside Philly, I’ve been torn  about whether this place even deserves my attention, let alone a 7 hour drive to get there.  Still, I took the plunge. 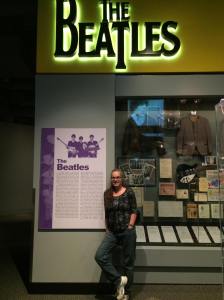 From the moment you walk through the doors, you are greeted with rock memorabilia.  It’s even hanging from the ceiling!  There are cases and cases of guitars that belong to rock n roll royalty, but (according to my husband), they are lacking on drum kits.  The only three kits they had were Ringo Starr‘s famous kit, an Alex Van Halen kit and a semi-melted kit that belonged to GreenDay that they had set ablaze at a festival.  Drum heads were at a premium, though.  As was memorabilia from Joan Jett who was inducted in 2015.  And Ringo Starr‘s blue star outfit from the cover of Goodnight Vienna is also on display in it’s own little case along a wall with the recent inductees.

But enough about all that…let’s get on to the Beatles display! 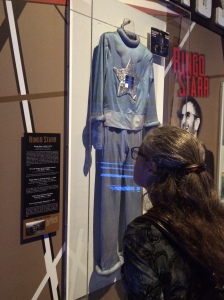 The Beatles display takes up an entire wall in one room.  The display case is filled with a lot of very powerful and amazing things, such as John Lennon‘s leather jacket that he is often photographed in during the Hamburg days.  Ringo’s drum kit is also displayed in a case in the middle of the room, but there is one problem.  On the opposite wall in this same room is a much larger display dedicated to The Rolling Stones!  WTF, Hall of Fame?!  There is even a Stones’ photo that covers a space that is almost the size of the entire Beatles collection case and there is an image of the Stones wrapped around a pillar in the room!  It’s enough to anger any good Fab Four fan.  I feel the need to write a letter of complaint. 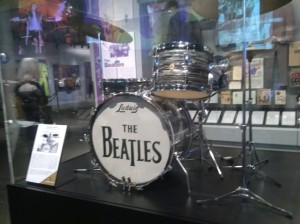 All in all though, we spent a good 6 hours walking, reading, interacting, discovering and learning about the roots of rock n roll.  There is something for everyone here, but I will warn you that a lot of the museum is filled with interactive kiosks that are just plain silly for the die-hard music fans.  If you do get to the museum soon though, the Herb Ritts photo exhibit on the top floor is amazing and even includes the contact sheet and photos Herb took of Paul McCartney.

This review is one of the toughest I’ve had to write because of the enormity of the museum.  I could go on and on, but it really must be seen in person, so add it to your bucket list.  A few things I feel I must mention before closing…try to visit in the Spring or Summer as the hall is located on Lake Erie (the view is spectacular) making it windy and cold in the winter months…also, there is a small cafè in the hall to grab a bite to eat.  And, if you’re traveling from out of town, some of the local hotels offer packages that include tickets to the Rock and Roll Hall of Fame.

I rate this museum 3 out of 4 Beetles!

Tagged as beatles, Cleveland, Rock and Roll Hall of Fame and Museum