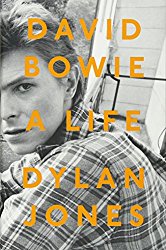 I’d love to say I’ve been loving this book and speeding through it’s pages, but that would just be an outright lie because I’ve been laboring to read it for over a month! I choose this book free as part of the Blogging for Books program because I was a (late to the game) fan of Bowie’s music in the 80’s. I couldn’t get enough of Jazzin’ for Blue Jean.

by Dylan Jones is a 521 page biography of…well…David Bowie. But it’s not your typical biography. Dylan Jones interviewed over 180 friends, family, colleagues, lovers and rivals of David Bowie. The list of contributors appears at the end of the book as the ultimate who’s who list of the rock and music industry, including Angie Bowie, Tony Visconti, Ricky Gervais, Paul McCartney and even Bowie himself. All the interviews were then broken down and placed in chronological order and presented as an oral history of the life and death of the man born as David Jones on January 8, 1947 in Brixton, U.K..

Though I started out enthusiastically reading this book, about a third of the way through it I got the feeling that a lot of the people interviewed for this book were the ultimate Bowie fans. The praising of everything he wore, sang, said or designed became overwhelming. Occasionally, the author throws in a quote from someone that pretty much amounts to, “David Bowie was a self-centered asshole!” and then the praise would start all over again. For me, it got to be too much.

At the same time, I can’t completely knock this book. This is one of the most complete and informative biographies that I’ve ever read and it really gets at the heart and soul of who David Bowie was and you will learn a lot about him in between the constant adulation of his genius and his sexual prowess.

I haven’t given up on this book yet and I will continue to read it until the end. I’m especially anxious to get to the part about his association with John Lennon and the writing of the song, “Fame“. And for that reason…