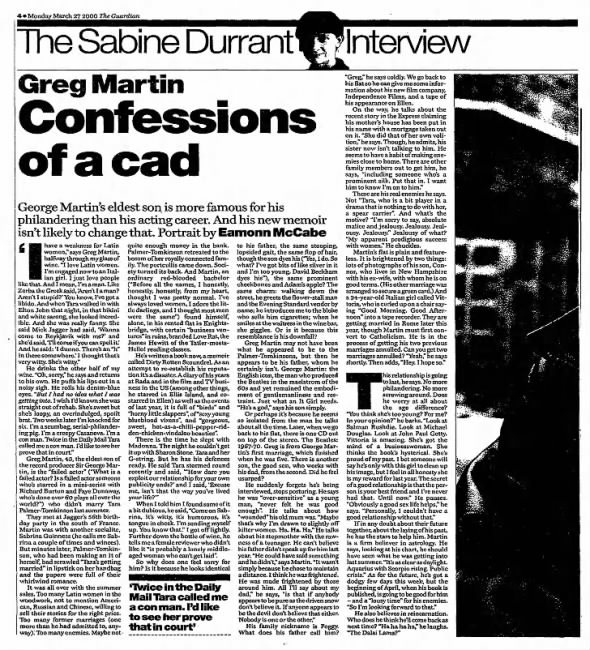 Book Review: “Watch It Come Down” by Gregory Paul Martin

I have so many thoughts about why I bought Watch It Come Down by Gregory Paul Martin, and about the book itself, that this post may be longer than the book itself which comes in at just 85 pages.

Many of my readers will know who Gregory Martin is just by the name. For those who don’t, Greg is the first born son of Sir George Martin, producer of most of the Beatles’ albums and without whom we might never have heard of the Fab Four.

I informally met Greg Martin via Skype when he read my astrology chart for me. You see, Greg is a very well accomplished astrologer. At that time in 2013, I paid $120 for (I believe) a 30 minute reading that was very on point and well done. Whenever I got the chance, I would recommend him to friends, until about 2 years ago when I was told he was putting an end to his readings… but! I could still get one more reading for $1000 before he took his leave. That was way outside my budget for such things so I took a pass.

I’ve been wondering what was up with Greg, especially after reading about the passing of his father in 2016 and the media frenzy over the fact that Greg was left out of his will. Well, last week Gregory Paul Martin turned up on my Facebook timeline when someone posted that he will be publishing an autobiography called Isn’t It A Pity in Spring 2021. Turns out Gregory also now has a Facebook page of his own, so I wasted no time in following him to find out when I’ll be able to get a copy to review for this site. I was informed…next year!

Poking around his Facebook and website, I came across this book, Watch It All Come Down: Human Consciousness, Astrology, and the Death and Rebirth of America published February 2019. My knowing him as an astrologer and having dabbled in it myself (I read my horoscopes daily), I felt intrigued and bought myself a copy.

At just 85 pages, I thought this book would be a quick afternoon read. Unfortunately, it didn’t turn out that way and I picked it up and put it down for three days. You see, according to Gregory, the United States is about to go through a huge upheaval according to it’s astrological chart when Pluto makes its return to its natal position in 2019/2020. (And yes, countries do have their own charts…America was obviously born on July 4, 1776.) At the same time, Donald Trump will also be going through a rough time astrologically and together, a lot of the wrongs that the U.S. has built up over its lifetime will come crashing down. Think of a phoenix rising from the ashes of destruction and you’ll get the picture.

So why did it take me 3 days to read a 85 page book? Because Mr. Martin is brutal about his opinion of the U.S. and its citizens! In the first 35 pages of this book, he goes over everything America has done wrong especially when it comes to wars, capitalism and being a world power. And even though he may be right, he just keeps hammering away long after making his point. As an American, it’s tough to read without getting pissed off. The only consolation is the fact that he says there will a rebirth after we crash down and the dawning of a new day.

After I finally spent two days reading about how awful we Americans have been (and trust me, he never has a kind word to say) Gregory spends two chapters on the chart of Donald Trump, explaining why he is the way he is and why it will be his demise in 2019/2020. For anyone who dislikes Trump, you’ll love these chapters, though you may need a basic course in astrology to understand the terminology. The rest of the book is about human consciousness, the universe and astrology. It’s quite interesting and he does recommend several books to back up his theories, but I wasn’t too keen on his taking a shot at one of the astrologers that I follow. There are thousands of well-known astrologers in the world, so I was truly surprised when her name (and only her name) popped up!

Needless to say, I’m glad I read this book. Will you enjoy it? Depends on your view of astrology, metaphysics and American politics. Of course, I believe Gregory Martin would say, “It doesn’t depend on your view of any of that because it is going to happen! It’s in the stars.”

P.S. – If you’d like to have an astrological chart reading by Gregory Paul Martin (and it still recommend him), you can book an appointment HERE. (and no…this is not a paid endorsement!)