Book Review: “Thanks A Lot Mr Kibblewhite: My Story” by Roger Daltrey 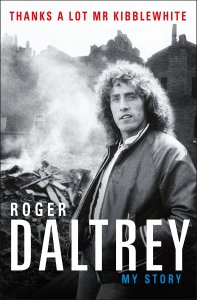 I saw Thanks A Lot Mr Kibblewhite: My Story by Roger Daltrey listed on Amazon’s suggestion list for me last week and it was only $13.50 (compared to the $30 cover price). This book was just released 3 months ago on October 23, 2018, so it left me scratching my had as to…1) Why I hadn’t heard of it until now and 2) Why is it so cheap so soon? I’ve always loved The Who and Roger Daltrey, so I bought a copy to review for all of you.

First, let me explain my “Who” background. I first really developed a liking for The Who in 1980 while visiting a friend for two weeks who put a stack of albums on her stereo every night so she could go to sleep to music. One of those albums was “Who’s Next”. I also have a strange memory of seeing “The Kids Are Alright” with my brother and his friends at a midnight showing some time in 1981? (I don’t do drugs and it’s still a little fuzzy, but that seems about right). In 1989, while 8 months pregnant, my husband and I saw The Who on their first comeback tour after their first farewell tour.

In Daltrey’s brief autobiography (240 pages), Roger tells you all the details of his childhood that shaped him, literally, into the man he is today. Bullied, jaw broken, broken back, poor family, etc. It’s all in there. And so is his story of the ins, outs, ups and downs of the band we’ve all known and loved for five decades. I don’t recall all the  stories from the sixties and seventies of them busting up hotel rooms or the in-fighting amongst the members, so it was all new to me. At the same time, throughout the stories, he does say several times that his band-mate Pete Townsend remembers things differently. There’s a part of me that wishes he would have told Pete’s side of the story, but I guess this is just a great way to force us all to buy Pete’s autobiography (Who I Am: A Memoir by Pete Townsend at Amazon for $15.75!)

This book read like a combination of Phil Collin’s autobiography (my band is so great we’ll never break up!) and Rod Stewart’s autobiography (I spread my seed far and wide and now have 8 kids, half of which I barely know!). I was left feeling like there was so much more to tell. Sure, he tells the stories behind the unfortunate deaths of Keith Moon and John Entwistle, along with clearing up several stories that the press got wrong about the band throughout the years, but I think his fans deserve an apology, not only for never actually going on a farewell tour (despite all the times they called it quits), but also for the debacle of the movie Lisztomania…though, I must say, the story of what he did with the two giant penises after filming was done is a really funny story.

For the Beatles fans, the Beatles appear nine times in this book and then there is the story of how Ringo’s son Zak became their drummer after the death of Keith Moon (who happened to be Zak’s godfather).

I love Roger Daltrey, especially in a loincloth in Tommy or in a tub full of baked beans…but I digress. Read this book because it’s the story of one of the greatest rock singers of all time, but I know that I will definitely be ordering Pete’s book, which at 560 pages hopefully will fill in some details. And for that reason…