Book Review: “With The Beatles” by Alistair Taylor 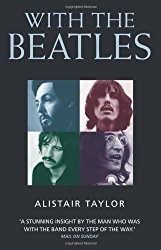 Last week I said I would touch upon the commentary given by Alistair Taylor in the documentary Brian Epstein: Inside the Fifth Beatle. It just so happens that I was reading Alistair’s autobiography last week when I took a break to see the film. With the Beatles was the last book written by Brian Epstein’s personal assistant Alistair Taylor. It’s actually revision of his 2001 book A Secret History

in 1988 that was reissued in 1991 under the title Yesterday: My Life With the Beatles

Why so many books by one man?

Alistair Taylor started working at NEMS in late 1960 at the age of 25. Originally he had been interviewed for a sales clerk position, but after a two hour interview, Brian Epstein hired him as his personal assistant. The rest my friends is history. Alistair would become Brian’s right-hand man throughout his time as the Beatles manager and would come to be known as “Mr. Fixit” in the Beatles circle.

Mr. Fixit was exactly as his name implies. He was in charge of any problems that arose in the Beatles professional and personal world. Alistair would shop for cars, houses, islands or anything else the Beatles might request.  If a pregnant fan showed up, Alistair could make her go away with a check from Brian. If a Beatle happened to unfortunately come down with a STD, Alistair would find the cure and hand deliver it to them. And so it went, for 9 years Alistair Taylor literally waited on John, Paul, George and Ringo hand and foot even after Brian’s death. He was even a shoulder to cry on when Jane Asher left Paul. Until 1969 when Allan Klein did a clean sweep of Apple Corp., fired Alistair and the Beatles stopped taking his calls. Life would never be the same….

This is Alistair’s story of those years. Interestingly, much of the first half of this book is quoted a lot in the documentary I watched last week about Brian. Still, it’s a book worthy of shelf space with any Beatles freak’s collection. And for that reason…