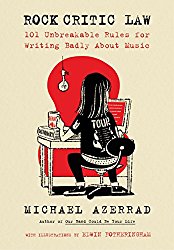 by Michael Azerrad is another book I got from Harper-Collins over three months ago. The copy I got is an unedited proof and according to the letter I got with it, this book won’t be released until October 18, 2018 (Amazon says the release date is December 15th). I’m not sure why they sent it out so early. I wrote to them in May and asked if it was okay to post a review, but they said they would prefer if I hold off until the month before publication (it is available for pre-order on Amazon). And so, this book has remained on the end table in my living room collecting dust for months and at this point, I just need to move it to the bookshelf. I’m going to defend this early review by saying that this book already has 5 reviews on GoodReads.com!

Author Michael Azerrad has written for most of the major music publications: Spin, Rolling Stone, Revolver, Mojo, etc.. He’s also the author of Come As You Are: The Story of Nirvana

and Our Band Could Be Your Life: Scenes from the American Indie Underground 1981-1991

. Several years ago, he started a Twitter feed under the name @RockCriticLaw and he set about making up ridiculous, yet profound, rules for anyone who reviews rock music.

For obvious reasons, I found this topic intriguing since no one had ever told me that there are rules for what I’ve been putting out on my blog for the last nine years. I’ll start by saying that the Introduction to this book may have more words than the 101 rules themselves. The rules are taken from Azerrad’s Twitter feed and some were even contributed by Twitter followers. Here are some of the rules:

All fan bases are either “devoted,” “dedicated,” or “loyal.”

Bass players are the only musicians that can be “nimble.”

If there are three or more bowed instruments on a track, then you MUST note the “lush orchestration.”

It doesn’t take long to breeze through these rules even with their comic illustrations on the facing pages to add to the humor behind each one. It’s disappointing that the book ends so quickly and makes me wonder if Azerrad should have held out until he could have made a “500 rules…” book to give the reader more bang for their buck, since the book retails for $23.99 and takes less than 30 minutes to read. And even though I was amused by it and got it for free, I probably won’t be keeping this book around to reread or use as a reference guide for my future reviews. It might just be easier to follow him on Twitter. And for that reason…