Documentary: “All Things Must Pass: The Rise and Fall of Tower Records” 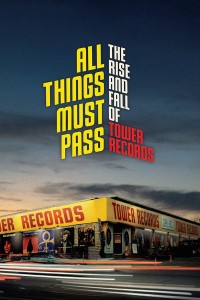 All Things Must Pass has been on my wishlist to view for a couple years now. It wasn’t until a friend happened to mention it on Facebook that it I finally decided it was time to watch this documentary. The movie is directed by Colin Hanks (son of Tom Hanks) and was officially released on March 19, 2015.

A little background info about me to make it understood where I’m coming from when I write this review. In 1986, at the age of 21, I got a job working as the 3rd key manager of the local Sam Goody‘s store in the mall. It was at this time, I also started dating the man that would become my husband (see picture). 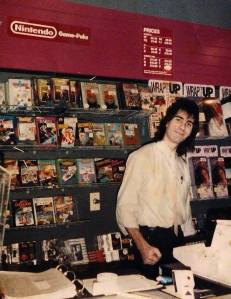 He worked in the same mall managing a privately owned record store called Grand Records. By the time we married (actually, we found out when we returned from our honeymoon), Grand Records had been bought out by TransWorld Music. My husband worked at the same store but it’s named had been changed to Record Town. Within a year, I was working for the same company at a store called Tape World in another mall. Our dream, like so many others of our generation was to some day own our own record store.

Now back to my review of All Things Must Pass and the story of Tower Records. What started as a small record section in the back of Tower Pharmacy in Sacramento, California in the late 195o’s was soon to become an empire when the owner’s son, Russ Solomon, asked his father if he could expand the record department. Instead, his father signed over the record business to Russ and thus, Tower Records was born in 1960. After opening several more stores in California, by 1979 they opened their first international store in Japan to huge crowds standing outside to be the first to explore the extensive racks of American and international music. Eventually, Tower Records would have stores on the east and west coasts of the U.S. along with stores in the United Kingdom, Canada, Hong Kong, Taiwan, Singapore, South Korea, Thailand, Malaysia, the Philippines, Ireland, Israel, United Arab Emirates, Mexico, Colombia, Ecuador, and Argentina.But by 2004, they were filing for bankruptcy. So what went wrong?

This documentary brings to light the real story of Tower Records from the man himself, Russ Solomon, and his early employees who grew with him and the company through the decades. From his early days working in his dad’s pharmacy, to the final days of Tower Records in New York city store as he watched it’s final minutes of liquidation before closing it’s doors forever, this movie tells of the music and madness of the record industry from the retail perspective. Along the way (in this 1 hour 36 minute film), Colin Hanks interviews Bruce Springsteen, Elton John (they opened the store early for him so he could shop), and David Grohl (he worked at Tower Records in Washington, D.C. when he was younger). You’ll also see plenty of Beatles album covers in old photos and footage from the early days and there is even a 1974 audio clip of John Lennon doing a radio ad for Tower Records and his soon to be release album Walls and Bridges. It’s an incredibly fascinating story for us baby boomers who lived and breathed for our next piece of vinyl, cassette or CD and I believe even the millennials will enjoy seeing how we saw the music industry after the juke boxes and before Napster and MP3s. And for that reason…

I rate this documentary, 4 out of 4 Beetles!

You can’t rent All Things Must Pass online at places like Amazon, NetFlix

or iTunes, or you can buy a copy of the DVD/BlueRay