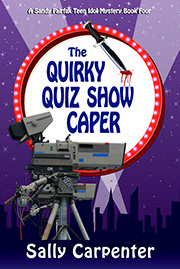 Four and a half years ago, I reviewed Sally Carpenter‘s first book in her Sandy Fairfax Teen Idol Mystery series.  The book was called, The Baffled Beatlemaniac Caper and you can read my review of it here.  A couple weeks ago, Sally announced that her fourth book in the series,  The Quirky Quiz Show Caper, had been released and she told me that there were a couple Beatles references in it!  Yay!

This book is another brilliant mystery written by Sally Carpenter.  I don’t know, maybe it’s just me, but I haven’t been able to figure out who the culprit is in her stories until her hero, former child star and teen idol Sandy Fairfax, solves the mystery and announces the bad guy!  And though this is the fourth book in the series, Sally does a great job of making sure that she reintroduces her returning characters from the previous stories so the reader doesn’t feel lost or left out.

These books are a nice easy, quick (under 250 pages), adult read or they would be great for older kids or young adults.  Much like a modern day Nancy Drew or Hardy Boys mysteries, these books could easily become a hit among the younger sect…and still in style for we Beatles fans!  And for that reason…

For more information about the books or author, go to the Sandy Fairfax Teen Idol Fan Page.

This book is also available on Kindle  for just $2.99.  Or, you can buy the entire series in paperback here.