Last Friday, June 10th, my husband (CigarCraig) and I made our way down to Wilmington, DE to see James McCartney perform at the World Cafè Live at the Queen.  This was our second time seeing James live at this venue and we were really looking forward to this show after being so impressed the first time!  He’s touring in support of his new album, The Blackberry Train

Let me preface this review by saying that my initial plan was to review this show for my usual Sunday review post earlier this week, but I had to go with a book review instead because I couldn’t decide whether or not I really wanted to voice my opinion on this show or not.  James McCartney fans…you’ve been warned!

This venue is a cafè/restaurant that accommodates 100 seated or 200 standing patrons.  From the looks of it, I don’t believe it was even half full with seated patrons.  And, wanting to know if he was just having an off night, the next day, I  looked into seeing James perform again  at The Saint  in Asbury Park and there were still tickets available for that show at a venue that holds 175 patrons. I decided not to go… 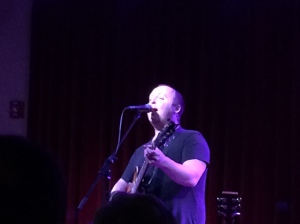 James was running late, so the opening act was delayed 30 minutes.  Not a problem, as most people were still enjoying their dinners and it’s most annoying to have to deal with wait staff while trying to watch a show.  When James finally appeared, he seemed rushed, as one might assume, as he hurried about the stage setting up his own amp, pedals and 3 guitars.  Kudos to him for doing this.  One would think that the son of one of the most recognizable and riches men on earth would insist on a road crew.

About 2-3 songs into the show, I took a piece of paper and a pen out of my purse and wrote, “He’s phoning this in!” on a note to my husband.  In his usual stoic manner, James seemed to rush through each song as he read his playlist off the back of his CD!  Honestly, the guitars were too loud and overpowering for his vocals (yet he asked the guy as the sound board several times to turn up the monitors, mic and reverb).  I just couldn’t understand why he was giving such a disappointing performance.  My answer came by way of a friend after the show when she said, “I think this is therapy for him.”  With this, I decided to hold off on my judgment of this show until after listening to the new CD.

The CD turned out to be so much better than the live performance.  As was stated by my friend, it seems to be James’ way of dealing with his demons, as there are at least 3 or more drug references that I heard in the songs.  Still, the songs are good and I did let it spin three times on the CD player in my car before finally putting it away.

But this brings up the question: Does an artist dealing with his own personal issues need to be given a pass on a bad performance?  After finishing his last song, there was no encore…he just threw on his backpack and left the stage, only to return a couple minutes later and say he had CDs and t-shirts for sale.  I asked if he would be staying in town for the night or going on to Asbury Park.  He said he was staying and I said, “Wilmington’s not very exciting, you’d have a better time in Asbury Park.”  His response was a very serious, “Do I not look excited?”  Uh…then my husband took the picture.  Does he look excited to you?

And for that reason…

I give this concert: 1 out of 4 Beetles!