EP Review: ‘Priming the Pride’ by Such As Us 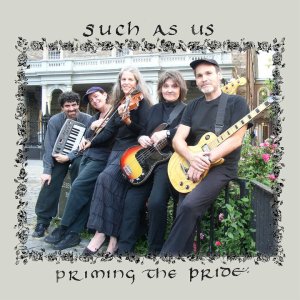 Early last month, I got an interesting email in my inbox from Maureen Shames, Sid Bernstein’s former publicist (Sid Bernstein is the promoter that brought the Beatles to America).  She emailed me a promotion package on a new band, Such As Us, that she’s representing along with Sid.  This neo-folk-rock band made my spidey-senses tingle so I offered to review their new EP if she’d send me a copy.

“Priming the Pride” is a four song EP that took me back to the folk songs of the 60’s…seriously!  This band conjured up images of Woodstock and folk festivals old and new.  This is the music that makes you want to spread out a blanket on the lawn and mellow out.  And to stay true to the form of the 60’s folk era, these songs come along with a messages.

The only thing I believe is lacking, is that these songs could probably use a little more producing…but would it really be a folk album if all the edges were smoothed over?

I gotta say…I honestly look forward to hearing this band’s upcoming CD release – to be release Summer 2011.  Their music relaxes me…in the way that Peter, Paul and Mary’s Puff the Magic Dragon did when I was a child.

For anyone in the NYC area, you’ll have the opportunity to see this band live tonight  (June 1, 2011) at Patsy’s Restaurant (see image to the left).

For more information on Such As US or to listen to their EP, go to www.facebook.com/SuchAsUs.

One response to “EP Review: ‘Priming the Pride’ by Such As Us”