The Beatles in Rome

Life gets very hectic in my world these days and isn’t allowing me a lot of time for reading or reviewing. One reason is because I was in Rome last weekend! Here’s a clip of me trying to tell you all about the Teatro Adriano and it’s Beatles link. 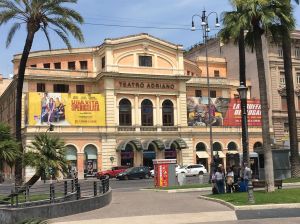 The Teatro Adriano was built in 1898 and as I state in the video, the Beatles played four shows there…two on June 27 and 28, 1965. The shows were at 4:30 p.m. and 9:30 p.m. and the setlist was the same 12 songs they had been performing throughout their European tour (Twist And Shout, She’s A Woman, I’m A Loser, Can’t Buy Me Love, Baby’s In Black, I Wanna Be Your Man, A Hard Day’s Night, Everybody’s Trying To Be My Baby, Rock And Roll Music, I Feel Fine, Ticket To Ride and Long Tall Sally). 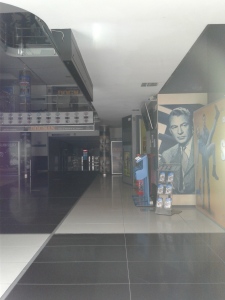 I wasn’t able to get inside the theater, but did get a fuzzy picture of the lobby through the glass doors. It’s now a multiplex movie theater, but I still would have loved to see the inside.

I did visit a bookstore while in Rome looking for any new and interesting Beatles books, but all I found was the usual suspects or books in Italian and unfortunately, I don’t speak Italiano! I wish I had more to report, but even though the Beatles are loved around the world, they weren’t the main focus of our trip…but we did hear several cover versions of their songs while sitting in restaurants.