Book Review: “Once Upon A Time In Liverpool” by Judith Kristen and illustrated by Eric Cash

A book I should have read long ago when I bought it after it was first released, Once Upon a Time in Liverpool

by Judith Kristen and illustrated by Eric Cash was published November 16, 2012. According to the copyright page, the printing of this book was limited to 1000 copies. You can still find new copies on Amazon and on Eric Cash’s website, so I sent a couple emails last week to find out if the book did go into a second printing, but I never got an answer.

Once Upon A Time In Liverpool is a 40 page children’s book that is as wonderful to look at as it is to read. After spending the past several weeks reading a lot of different children’s books about The Beatles, I believe this one is the must have for any parent introducing their children to the Beatles for the first time, or for any Beatles book collector. Between Eric’s amazing retro styled paintings & long history of painting the Beatles, matched with Judith’s skills at writing children’s books, these two seem to have found the right combination to tell the story properly! Each Beatle is introduced to the reader with their birth date, parents, where in Liverpool they were born and what schools they attended. The readers is then lead through each of their lives as they came together to be the Fab Four that we know today. They even include Pete Best and Stuart Sutcliff in their little book. Just Fab! And for that reason…

Book Review: “A, B, See…The Beatles! A Children’s ABC Book” by Jill Davis

**I have a big surprise for my readers on Sunday, December 17th, so I’m posting a review a little early… 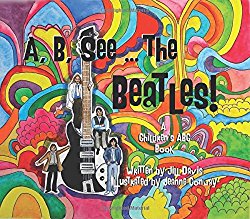 A, B, See the Beatles!: A Children’s ABC Book

by Jill Davis and illustrated by Jeanne Conway was published on August 4, 2015. Jill, an elementary school teacher for 35 years, was inspired to write this book for her grandchildren after going on the Magical History Tour of Liverpool and London in 2010.

This is going to be a short review, because otherwise the review will be longer than the book itself.

Jill Davis needs to be congratulated on her very unique choice of Beatle-y words and topics to go with each letter of the alphabet and to her illustrator for doing a fantastic job of bringing the words to life through large colorful paintings. That being said, this 36 page book starts off the alphabet with:

A is for Apple, not the kind you eat.

Okay…now explain to me how you’re going to explain to your 3-5 year old exactly what she means by Apple if it’s not the eating kind? And how do you explain the letter E, which is for Epstein and Eggman?

“What’s an Eggman mommy?” Well, darling, it’s the nickname of Eric Burdon of the band The Animals because he used to break raw eggs on his sex partners.

Beautiful book, beautiful pictures, but in my opinion the choice of Beatle words Ms. Davis chose for a lot of the letters are far beyond the scope of your average pre-school child whether they are fans of the songs or not. Expect to do a lot of explaining. I do recommend it though for Beatle book collectors. And for that reason…

Book Review: “High In The Clouds” by Paul McCartney

High in the Clouds

by Paul McCartney (and children’s author Philip Ardagh) is a 96 page children’s book originally released on October 3, 2005. The artwork is by award winning animator Geoff Dunbar who is the artist behind Paul McCartney’s Rupert and the Frog Chorus video and the song “We All Stand Together” (see video below).

This book is being made into a movie and is currently in pre-production according to IMDb.

In 2013, it was reported that an animated feature film adaptation of the book was in development by producers Michael Lynne and Bob Shaye through their Unique Features banner and RGH Entertainment. Tony Bancroft was set to direct the film, written by Josh Klausner, with Paul McCartney set to compose several original songs. The film was optioned by Gaumont.

This story is about a squirrel named Wirral (yeah, just like the town across the River Mersey where Cynthia Lennon grew up), who, after his forest home of Woodland is destroyed and his mother is killed by bulldozers, is in search of the island paradise of Animalia where all the animals live free and in peace. A few other notes of interest:

This book is absolutely beautifully illustrated. So much so that I had wished there were more pictures to go along with the story. The story itself is good and one can imagine a child of 6 to 9 years of age (recommended age) reading this book to them self. I think my only concern would be the title “High in the Clouds”. Though there is a character in the book named Froggo who travels by hot air balloon, most of the story is on the ground, making me wonder if this is just another one of Sir Paul’s marijuana references. I mean this is the guy that wrote the love song “Gotta to Get You into My Life” about weed! And for that reason…

From Wikipedia: “Octopus’s Garden” is a song by the Beatles written and sung by Ringo Starr (credited to his real name Richard Starkey) from the Beatles’ 1969 album Abbey Road.

Ringo Starr got the idea for his song Octopus’s Garden while vacationing on a yacht in the Mediterranean sea in 1968. The inspiration came when the captain of the ship told him that octopuses live in caves and that they like to collect shiny objects to decorate around the opening of the cave like a garden.

In 2014, Ringo Starr published a children’s book named after his song

. This 10″ x 11″ book is vibrantly colored and beautifully illustrated by Ben Cort. With only 24 pages, the lyrics guide the reader through an ocean adventure  with five children as they play in the fantasy garden of an octopus. The book also includes a CD with a greeting from Ringo, a new recording of the song, Ringo narrating the book (with a ‘ding’ to tell you when to turn the page) and an instrumental version of the title song.

As I said, the book is absolutely gorgeous and you’re going to wish it was longer. But it will be great for very small children and I can see where it would also be a fun book for playing “I Spy” with all the colorful objects in the octopus’s garden!  My first thought upon hearing Ringo’s greeting on the CD was “Ah! The little conductor man!” (for those that remember him in the TV show Thomas & Friends). But after that came my disappointment…Ringo had recorded a new (and not very good) version of Octopus’s Garden. When I consulted my Beatles expert friends about why he did this, they believe that even as a former Beatles the licensing cost to use the original song would have been to high to make a profit on this project. Still, I’m sure the children who hear the song won’t know the difference and will enjoy singing along like we all did at one time or another in our lives. And for that reason…