Book Review: “Once Upon A Time In Liverpool” by Judith Kristen and illustrated by Eric Cash 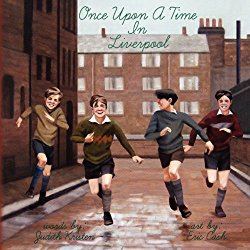 A book I should have read long ago when I bought it after it was first released, Once Upon a Time in Liverpool

by Judith Kristen and illustrated by Eric Cash was published November 16, 2012. According to the copyright page, the printing of this book was limited to 1000 copies. You can still find new copies on Amazon and on Eric Cash’s website, so I sent a couple emails last week to find out if the book did go into a second printing, but I never got an answer.

Once Upon A Time In Liverpool is a 40 page children’s book that is as wonderful to look at as it is to read. After spending the past several weeks reading a lot of different children’s books about The Beatles, I believe this one is the must have for any parent introducing their children to the Beatles for the first time, or for any Beatles book collector. Between Eric’s amazing retro styled paintings & long history of painting the Beatles, matched with Judith’s skills at writing children’s books, these two seem to have found the right combination to tell the story properly! Each Beatle is introduced to the reader with their birth date, parents, where in Liverpool they were born and what schools they attended. The readers is then lead through each of their lives as they came together to be the Fab Four that we know today. They even include Pete Best and Stuart Sutcliff in their little book. Just Fab! And for that reason…

Book Review: A Date With A Beatle by Judith Kristen

A Date With A Beatle by Judith Kristen

This was my second attempt at reading A Date With A Beatle.  I had bought the book at the Fest for Beatles Fans in NJ in 2010.  The first time through, I managed to get to page 61 of this 171 page book about a young girl’s attempt to meet George Harrison.  I’ll give my first impression report and in the end…I’ll give my overall impression after actually finishing this book.

I picked up this book after meetin Judith Kristen and her husband at The Fest.  Knowing that the first editions of Jude Southerland Kessler‘s self-published novel on John Lennon now sell for up to $1000, I figured I’d pick up a 1st edition copy of ‘A Date With A Beatle‘ as an investment.  After reading the first 19 very short chapters of this book, I just cringed.  Something just didn’t sit right with me about how a woman could remember such detail after 45 years.  It was then I saw in the front of the book, “This book is partially fictionalized”.  Then it made sense to me that I wasn’t quite sure how much was made up and I felt duped!  I put the book down for over a year.

Last week, I decided to pick this book up again and finally review it, knowing full well that this could turn out really bad for any future dealings with Ms. Kristen or her husband since we’ve been known to be seen in the came circles.

Once again…I struggled.  After only 1o chapters, I felt like this was work, but I championed on…determined to finish and review it.  I tried to anaylize why I was struggling with the way the story was being presented and then it hit me that Judith Kristen is also a children’s book author and I believe that in her own way…she dumbed down this book a bit much.  Or maybe it’s the attempt to write it in her voice as it was when she was 16.  Or maybe it was the over-the-top conversations between her and her friends and police officers.   Finally, I can say I finished it.

I can honestly say that by the her last attempt to meet George Harrison in the story in this book, she had me hooked.  The ending is whitty and will make you smile.  I am glad I read it…and the latest edition has a beautiful new cover from Beatles artist Eric Cash.  I’ve also read that Ms. Kristen has been invited to Beatles Week in Liverpool later this month and then will start a book tour of German where her book has now been published in German.  Best of luck to her!

You can buy her book on Amazon.

I can believe I’m about to say this….but…